PLASTIC AND THE OCEAN

A global problem – from City to Sea

Want to know more about how plastics end up in our oceans and what happens when it gets there?  You’ve come to the right place!

Close to 300m tonnes of new plastic is produced every year and much of this ending up in our oceans, impacting marine life and even ending up in the food we eat.  Here we explore the depths of issues affecting our oceans and separate off the fishy fearmongering from the really big problems our oceans face.

Between 8-12 million tonnes of plastic end up in our oceans every year.

80% of plastic in our oceans is from land based sources.

Around 20% of plastic in the ocean comes from human activities at sea – mostly fishing.

640,000 tonnes of abandoned, lost or discarded fishing equipment enters the ocean and is left there.

A few years ago it was estimated that there were up to 5.25 trillion pieces of plastic weighing 250,000 tonnes floating on the high seas. This is a whaley big number – for context, the heaviest animal in the world, the blue whale, weighs just 190 tons.

The bad news is, that this is just only the tip of the iceberg. It’s thought that just 1% of the plastics in the ocean are on the surface. And research by Eunomia shows that 94% of the plastic that enters the ocean actually ends up on the seafloor! There is now on average an estimated 70kg of plastic in each square kilometre of sea bed.

The same research shows that 80% of plastic in our oceans is from land-based sources. The remainder comes from plastics released at sea, such as lost and discarded fishing gear. 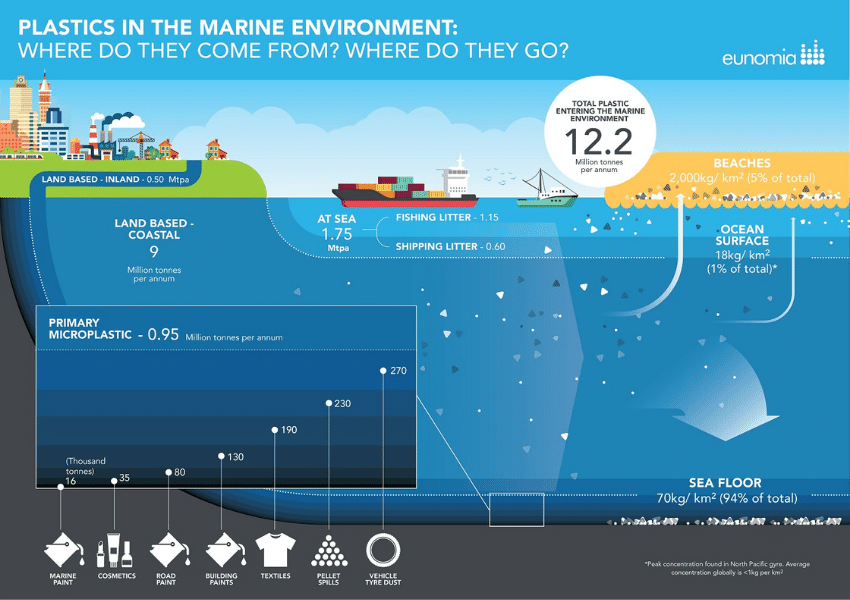 Once in the ocean, pieces of plastic break down over time due to natural water erosion & direct sun to form tiny pieces less than 5mm long, often invisible to the naked eye – which are called microplastics. They’re also caused by things like microbeads in cosmetics and synthetic fibres from our clothes. One of the biggest problems is the dust from our tyres which runs off the roads and into drains which lead to our oceans.

Once in the oceans, microplastics absorb toxic chemicals and enter our food chain. Scientists now think the average person eats at least 50,000 particles of microplastic a year – this is the size of a credit card EVERY year!

Microplastics are also influenced by global currents. In certain hotspots in the ocean, these currents merge together forming gyres, where vast amounts of plastic waste accumulate. These plastic vortexes are not floating piles of rubbish, but areas where tiny fragments and microplastics accumulate making them hard to monitor and almost impossible to clean up.

Sold down the river by big the plastics industry

Even if you don’t live by a beach, you can still have a surprisingly big impact on our oceans. That’s because plastic can travel so far from its source. It’s thought that globally, 10 rivers are the source of 88 to 95 per cent of the total plastic waste transported by rivers into oceans. Eight of these rivers are in Asia: the Yangtze; Indus; Yellow; Hai He; Ganges; Pearl; Amur; Mekong; and the other two are in Africa – the Nile and the Niger.

So what’s this got to do with the UK? Well, in the three years leading up to 2019, the UK was exporting half a million tonnes of plastic to China and Hong Kong. Yep, that’s right, about two-thirds of all our plastic was being sent abroad to Asian countries where they have little or no infrastructure for recycling or managing waste.

We can’t recycle our way out of this.

Find out more about why recycling doesn't work

Plastic doesn’t just pollute our beaches, it also has a catastrophic impact on marine animals who get entangled in larger pieces and mistake smaller pieces for food. Ingestion of plastic particles can prevent them from digesting normal food and might attract toxic chemical pollutants to their organisms.

In fact, it was the fate of the Albatross, whose plight was brought to life in the heart-wrenching film by Chris Jordan – Albatross, that kick-started our founder Nat into action and led her to set up City to Sea.

THE FISHING INDUSTRY ON THE HOOK

According to a report by our amigos at Greenpeace, a ghoulish 640,000 tonnes of abandoned or lost “ghost” fishing gear enters the ocean every year, equivalent in weight to more than 50 thousand double decker buses.

That’s about 10% – 20% of marine pollution in our oceans. This issue has been propelled into the limelight by the smash hit documentary, Seaspiracy. If you’ve not watched it yet, do!

Find out more about Seaspiracy

DON’T BE A FOSSIL FOOL

But it’s not just plastic pollution that’s a problem. The emissions from the plastics industry are also having a devastating impact on our oceans. According to the UN, climate change is heating the oceans and altering their chemistry so dramatically that it is threatening the very existence of coral reefs, fuelling cyclones and floods and posing profound risks to the hundreds of millions of people living along the coasts.

And here’s the rub: If the plastic industry has its way, rising plastic production will account for 15% of global greenhouse gas emissions by 2050. That’s about the same as the entire current emissions of the transportation industry – planes, trains, cars, buses and all. Huge!

If you feel like we do and want to stand up for oceans and be part of the tides of change then get involved with our award-winning campaigns today.

Find out how to cut down the amount of single-use plastic in your life.

Donate to our campaigns

Make a one-off or regular gift to support our planet-saving work.

Our free monithly journal, with tips to help you live with less plastic.